We will achieve in the future, as we have in the past… 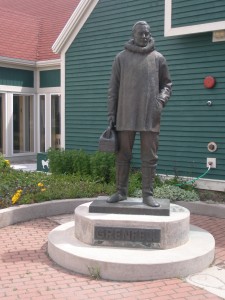 As I continue with my vacation on June 27, 2010…no trip to St. Anthony could have been complete without a visit to Grenfell Historic Properties. The scene was 1892 when Dr. William Thomason Grenfell, a new practitioner of the UK decides to join the Royal National Mission to Deep Sea Fisherman. Dr. Grenfell came to rural regions of Labrador during that first year. Medical and social conditions were so deplorable that led Dr. Grenfell to return, but with the help of a couple of doctors, nurses and a hospital boat. His mission had began to bring medical, social services and hope through preaching to the people to rural Newfoundland and Labrador.

Dr. Grenfell had a passion and strong belief to make life better for those around him. His faith in himself and the inspiration he had on others led to monumental developments which started the Grenfell Mission.

He began developing cottage hospitals, fundraising and expanding services to various regions. By 1912 he had established the International Grenfell Association, which gained international recognition by 1914. Dr. Grenfell had began to take on many ambitious projects including developing schools, orphanages, social services, preaching, industrial projects (Grenfell Handicrafts), co-operatives, and agricultural sites, as well as authoring books, articles and creating artwork to sell in the form of Christmas cards. Additionally, Dr. Grenfell began promoting the mission to many renown and influential figures from across the world including former Presidents of the United States, Prime Ministers of England and Prime Ministers of Canada, as well as industrialists and other philanthropists who became supporters and donors.

Dr. Grenfell was an icon and has forever left his mark on the development of rural Newfoundland and Labrador. In his career he had established a number of hospitals and medical services, founded the International Grenfell Association, written 33 books, numerous articles, was knighted, inducted in the Canadian Medical Hall of Fame, Memorial University’s Western Campus is named in his honor, he has his own distinguished fabric, known as “Grenfell Cloth”, Grenfell Drive carries his name and he has forever left a special place in my heart. 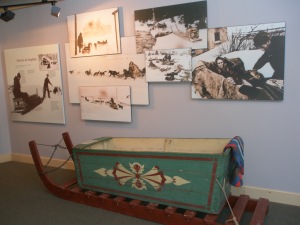 Sir Doctor Wilfred Thomason Grenfell is a role model. A man who stood for something, especially for the people of rural Newfoundland and Labrador. The life changes and improvements that occurred in these regions because of him is expansive. After a visit to the interpretation centre, I asked myself, how did he manage all of these things? You could say he was well-rounded and a “jack of all traits”.

One short post can not do justice to this titan of a man, so there will be more on him and his contributions in the future. I’ll leave on the note that we are privileged to have many explorers, adventures, pioneers, missionaries, industrialists and settlers come to rural Newfoundland and Labrador and build the roots for the special place it is to all that has had the opportunity to experience it for themselves. Dr. Grenfell may be gone, but he is not forgotten and his legacy gracefully lives on. There are others who have come and gone since him and many more to follow. We all have our place and contributions to make, ensuring that Rural Newfoundland and Labrador flourishes with all the success it rightfully can achieve!

Stealing a line from Dale Carnagie, “If it’s to be, it’s up to me!” Tell yourself that three times out loud.

Together we can achieve the things we think we can not. Believe and we will prosper…