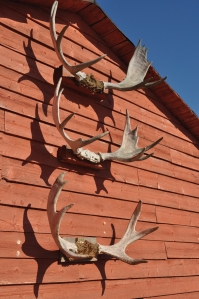 The Rick Mercer Report  brought National attention to the moose population by tacking a helicopter to track and tag moose at Gros Morne National Park. He coined Gros Morne, as home to the more moose per square kilometer than almost anywhere on Earth.  Newfoundland & Labrador has a growing moose population, which CBC.ca has reported there are more than 150,000 moose in the province, with about 5,000 in Gros Morne National Park alone. This is a large number considering the human population of the island portion of the province is about 480,000 people.

I support the issue of approximately 500 moose licences in these National Parks. This is a good start, considering the damage and impact they are having on other species, habitats and on human life. Just two weeks ago, when driving through Gros Morne National Park the sign states, so far this year “7 Vehicle Collisions involving Moose”. I have seen this sign reach the mid-thirties as the summer continues. CBC reported in a link below, that one woman had hit three moose in May.
The management of the moose population is becoming a growing problem in Newfoundland & Labrador. The Provincial Government is taking some action, as they are grooming greater parts of the highway and issuing 5,000 additional licences, after continued pressure from SOPAC (Save Our People Action Committee) and a class-action lawsuit against the Crown from victims of moose-vehicle collisions. The Federal Government has finally taken action regarding the growing problems at Gros Morne National Park.
The Federal Government should work with local outfitters that have the planes and resources to provide them with additional licences. The economic impact on the local economy can be great.
Live Rural NL 0
Christopher Mitchelmore