The Straits Mummer’s Walk started in 2010, when my friend Sabrina and I talked about how much we loved mummering and how the tradition was losing ground since when we were teenagers. She proposed a walk and we began the organization that December and chose the 29th as the official day of the mummer. The event was planned for our administrative hub in Flower’s Cove. We were greatly impressed that 20 people had the interest on a bitterly cold December day to parade around the Town.

Our goal always has been to increase awareness and encourage more mummering at the households. In 2011, at Anchor Point two mummer’s joined us from Switzerland and Germany to learn the art of Christmas mummering. We also visited many households in Green Island Cove that year.

In 2012, Savage Cove produced the greatest number of mummers at 44. We were very pleased to see so many younger jannies participate. It was on a Saturday, but still bitterly cold. 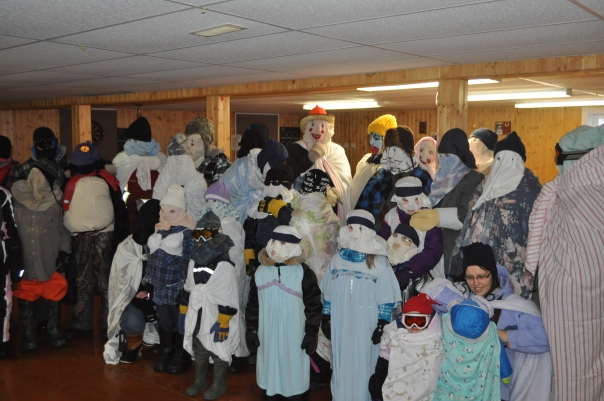 In 2013, Green Island Cove was our venue with a crowd of jannies joining us from St. Lunaire-Griquet to bring our tally to 40. It was a very cold day, so we had a short parade route just using the lower road. It was quit the sight the community had not seen in years.

This year, the event was held in Sandy Cove on a Monday and brought out 30 mummers, one as far as Port Saunders. There were big ones and small ones and talls ones and thin. A truly wonderful collection of dress, demeanor and age groups. There are some mummers that come every year and always new ones. I love the influx of new mummers, when an event is held in their own community, but the regional spirit by having those of surrounding communities join in to make the event an even larger success.

A couple of tunes were played by Wilga Hughes of Green Island Brook from his accordion and the mummers danced. Then we all marched off to the church and returned to the Lion’s Club. The RCMP and Straits Fire Department were on the scene to ensure safety of our participants. I am very thankful to those volunteers who gave freely of their time for the Mummer’s Walk. After a return to the Lion’s Club, we had Purity Syrup, Hot Chocolate and a few treats. Prizes were drawn and a little music played. Everyone was in the spirit and a number of people went door-to-door mummering that night, at least that is what my Facebook feed had indicated as dozens of mummer’s have been popping up in communities from Anchor Point to Flower’s Cove to Sandy Cove to Green Island Brook and as far as Ship Cove and many places in between. It is exciting to see a resurgence and pride placed in keeping this Christmas tradition alive and well.

In recent years, I have seen more interest in the tradition from dances, more local visits and more memorabilia produced. Also this year, I was interviewed by Folklorist Dale Jarvis and photos and pieces of my contribution made print in the book, “Any Mummer’s ‘lowed in?” I encourage people to get a copy and give it a read, there is lots of talk of the Northern Peninsula Mummers or Jannies.

The Mummer’s Walk on the Great Northern Peninsula all started when two friends shared a conversation about their love for the tradition of mummering. The event was to be regionally focused, bringing together people from many communities to teach the younger generation a rural tradition cherished by those of our grandparents.

The first event started in Flower’s Cove (2010), then Anchor Point (2011), Savage Cove (2012), Green Island Cove (2013) and this year’s event will be in Sandy Cove. People will congregate at the Sandy Cove Lion’s Club anytime after 2 PM for the rig-up and the walk will begin at 2:30 PM. If past years are any indicator, it likely will be cold and may result in a shorter parade route. Festivities will continue after the walk at the Lion’s Club. This event is opened to all ages and everyone is invited to attend.

Let’s celebrate Mummering and make December 29th as the official day of the Mummer!

Any Mummers ‘lowed In? and 5th Annual Mummer’s Walk Announced!

Newfoundland and Labrador folklorist Dale Jarvis has produced a book documenting a tradition that is very near and dear to my heart with his launch of “Any Mummers ‘lowed In?”

I first met Dale Jarvis in the summer of 2001 as a participant of Medquest. One of the activities on our list was the Haunted Hike http://www.hauntedhike.com/. These hikes take place between June and September and tell local tales and ghost stories that have quite an impact. It was actually where I met my friend, Amanda who celebrates today. Happy Birthday!

I’ve always had an interest in the concept of mummering or jannying since a very young age. As a young child, I would go door to door in disguise at Christmastime. This continued through the teenage and even today’s adult years. My major paper in Folklore 1000 was on Christmas Mummering and in 2010 my friend Sabrina and I co-founded the first ever Mummer’s Walk in the Straits at Flower’s Cove. It has continued each year at Anchor Point (2011), Savage Cove (2012) and Green Island Cove (2013). We have seen a revival in the region of mummering with more people going door to door, mummer’s dances, mummer crafts, memorabilia and other activities.

It was a pleasure to be interviewed by Dale Jarvis in January of this year, as he was compiling stories, photos and information about mummering in preparation for his book. “Any Mummers ‘lowed in?” was officially launched on October 15th. It is amazing to see this work in printed form, as I received a copy as gift from my friend Krista for my birthday on the 23rd. I have only had the opportunity to read the first chapter, but have skimmed the book, peering at the variety of images, songs and took an interest in the section of the hobby horse. I look forward to reading it in its entirety.

My excitement was greatly peaked when I turned to page 4. I snapped a photo and sent a text to my cousin and said, “remember this?”. We were tiny mummers visiting the neighbours. I believe we told them we were from Sandy Cove or Green Island Brook depending on the house. Likely my mother had already called in advance letting them know we were on our way. The wonderful memories of growing up in Green Island Cove!

Throughout the book are a number of images of mummers of all ages over the years, including several from the Great Northern Peninsula that include our Mummer Walks and Dances.

I encourage people to get a copy of this wonderful book, just in time for the holidays! The book is a masterfully done in a way that preserves, shows an evolution of mummering and shares our local knowledge and culture of these centuries old tradition. If you would like to get a copy you can do so direct from Chapters/Indigo or Flanker Press on-line or purchase at many bookstores. Visit http://dalejarvis.blogspot.ca/ for more information about the author, book, up-coming signings and how to purchase.

One thing I’ve come to learn more recently from our interview is Dale Jarvis certainly is a mummering enthusiast, a hobby horse maker and a founding member of the 2009 Mummers Festival in St. John’s. We need others to share in our interest and encourage more active mummering. It truly is a tradition that has been around for as long as anyone in our rural outports can remember. This year I would like to announce that our 5th Annual Mummer’s Walk will be on December 28th at Sandy Cove on the Great Northern Peninsula. 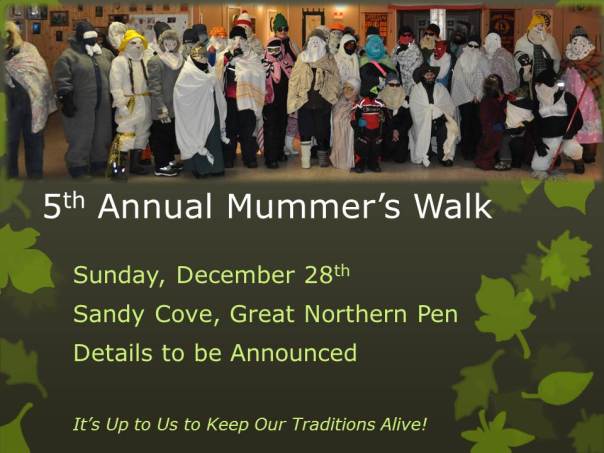