I fell in Love with the Galway Girl…

Galway, Ireland is such a trendy city. It has been coined Ireland’s Cultural Heart as it boasts a vibrant lifestyle with a number of festivals and special events.
We decided to drop into the “Tig Coili”, which was recommended by a Canadian travelling abroad. He was originally from Winnipeg, Manitoba, which I had returned from only three weeks prior. We talked about Neechi Foods, Mondragon Bookstore & Coffee House, and the Chocolate Shop Restaurant.

JR & Sue Ellen were at the "Tig Coili"

JR & Sue Ellen were at the “Tig Coili”The Tig Coili was a real treat. On sat with our pints just under a photo of Larry Hagman & wife with Linda Grey, who starred as Sue Ellen and J.R. Ewing on Dallas. This made me very happy, as I started purchasing the series in early 2008 and have 10 seasons under my belt.  This certainly put a smile on my face, knowing these TV titans also visited this venue. The pints were easy to go down, with a group of musicians playing fiddles and squeezeboxes. It was very relaxing. 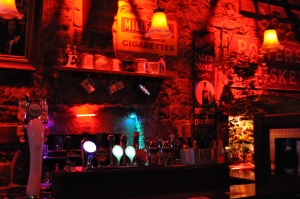 A selection of beers on tap

Galway, even mid-week, mid-November presented an opportunity to crowd into an establishment and hear a great band perform with everyone raising their beer glasses. This reminded me of the movie, “P.S. I Love You“, when the lady goes to the pub and hears the man she met earlier sing, “I Fell In Love with the Galway Girl“. The energy in the room provided a great feeling of excitement as we celebrated being in Ireland with friends and family. That night we would be joined by another friend, Tobias, from Germany.

I Fell in Love with the Galway Girl....Party in Ireland

Galway is a vibrant city, which I hope to return to visit the streets once more.
Live Rural NL 0
Christopher Mitchelmore