Before the expeditions of Giovanni Caboto (John Cabot, 1497), Christopher Columbus and Captain James Cook – we had visitors and inhabitants. More than 1,000 years ago the Norse (often referred to as “Vikings”) were the first Europeans to re-discover Newfoundland and Labrador.

The Norse established a settlement in L’Anse aux Meadows (translated “Jellyfish Cove”) which consisted of eight sod houses. This site was officially discovered by two Norwegians in 1960-61, after a local resident Mr. George Decker directed them to this site. In 1978, L’Anse aux Meadows was declared a World UNESCO Heritage Site. For more details visit Parks Canada’s website: http://www.pc.gc.ca/eng/lhn-nhs/nl/meadows/index.aspx.

On June 28, 2010 I had re-visited the site and experienced a feeling of re-discovery. This is a place I had not returned since I was a little boy almost 20 years ago. Some aspects I remember clearly, other elements are more vivid. At first, the replicated sod houses and all the artificial artifacts were real to me, thinking in the mind of a child. I remember the interpreter vividly in much different clothing.  A butterchurn that was on display intrigued me since it must have been a difficult process to make butter all those years ago; that it simply did not come pre-packaged at the local general store. Growing up in a lovely home with all the modernities of electricity and indoor plumbing of the 20th century (at the time), I could not imagine what life was like for these people more than 1,000 years ago. But, I certainly thought it was cool and would loved to have spent a night or two there, just for the experience! Hey, it couldn’t be that much difference from camping, right?

The Norse had stayed only for a short period of time (circa 8-10 years). Why did these people leave after only a short time and never return? 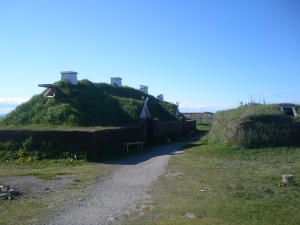 Significant findings give evidence that their was a blacksmith shop with forge for iron work, workshop and boat repair facility. The simple answer is that these industrious explorers established a site at Jellyfish Cove to repair their vessel and continue with their quest to find “Vinland”. Others have written accounts that there was much conflict with Natives, painting the Norse to be violent warriors. Although these people may be seafaring, they were also agriculturalists (farmers). We can not travel back more than 1,000 years ago to ask these questions and know the answers. However, when you read pieces of history or historiograhy (the writing of history) or an article, take a critical viewpoint of who is the writer, what is his/her motive and remember that most history is written from the viewpoint of the victor, possibly skewing events that actually occurred.

Remains of the Sod Building

The Norse culture had strong tradition of retaining oral history through storytelling, which later became part of the written sagas. The fact that this group of people had made a written account, enables historians to better piece together history with their findings. It is evident that Rural Newfoundland & Labrador for more than 1,000 years has been home to many cultures and should have many pages in our history books.

Rural Retrospect – when viewing the impressions in the ground left from the Norse settlement, I felt somewhat sadden. Overtime these impressions will become less visible, but I believe their mark is forever left as part of our heritage and will be preserved. It is up to us to keep written accounts of our history, our people, traditions and experiences. It is a way to define who we were and who we are today, where we have been, where we are and provide insight into the future as to where we are going.

On my 1,000 Places to See Before you Die calendar (thank you Karrie), yesterday’s page had a quote I liked:

“The earth belongs to anyone who stops for a moment, gazes and goes on his way” – Colette