← I Kissed the Blarney Stone – Blarney, Ireland
Where are our Local Farmer’s Markets? →

Celebrating 100…A walk through the Enchanted Forest

This post celebrates my 100th article on the Live Rural NL blog…which debuted in June 20, 2010.  It has been a wonderful opportunity to share with my readers my take on local culture, heritage, share recipes from grandma’s kitchen and provide some local photos of the scenic beauty of the breathtaking Great Northern Peninsula.

I have recently also began sharing some recent travel experiences to France and Ireland. During November 2010, my mom and I spent time connecting with the Irish culture, which for many rural Newfoundlanders & Labradorians would have immigrated. 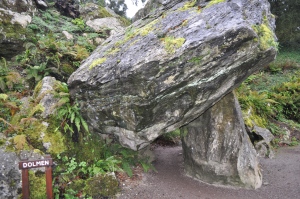 We spent the rest of the morning on Tuesday, walking through the enchanted forest at Rock Close.

Rock Close is laid out on a pre-historic Druids site with the remains of huge
boulders, rocks, a dolmen (a megalithic tomb), a sacrificial altar and a witches kitchen. You will also find Japanese bamboo trees, magnolias, Siberian dogwood and weeping willows and a stream which can be crossed. 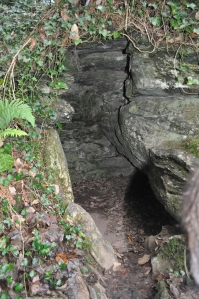 There was something magical about the place, as you made a wish after climbing the wishing steps. The ancient trees of the forests were something out of a storybook. It was quite interesting to see unique plants and pass a druid’s cave. I had the opportunity of visiting Stonehenge, England in 2007.

I enjoyed the druid’s cave and the witches kitchen. As well as the many photo opportunities with the old growth forest. I even got to practise framing.

Ireland, like this beautiful province has many outdoor attractions. Take some time to appreciate what is in your backyard. 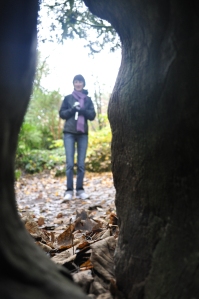 Framing my Mum from Inside the Cave

← I Kissed the Blarney Stone – Blarney, Ireland
Where are our Local Farmer’s Markets? →