On Friday, we headed to Casa Blanca, the village on the other side of the harbour in Havana. It is known for the massive marble statue of Christ and the Che Museum. We went by taxi via an underground tunnel as we planned to see the largest fort in Latin America. We were dropped off at the Che Museum.

The Che museum is quaint with limited information about this National hero. It has reproduction furniture from the era in the bedroom, office and medical equipment that was used during that time. The roof terrace presented dynamic views. One could see El Capitolio, the National Building in Havana, as it dominated the skyline.

As we leisurely strolled to the Fort in the raging sun, we passed  some children playing football (soccer). At the fort there were some excellent photo opportunities and an interesting museum with lots of artifacts and a variety of canons in all shapes and sizes. It was a ghastly hot day, but I found a gold mine when I entered the cave. It have great decorum, themed as a pirate ship with a bar that sold TuKola for $0.60 C.U.C. It was quite refreshing. Not to mention the natural air-conditioning was quite the hit as it brought my body temperature down significantly, making outside bearable one more.

In the afternoon we opted to visit Plaza that  hosted a book market with bistros surrounding and the Governor’s House, which is not a museum as the center of attention. We stopped at a restaurant to quench our thirsts and had a couple of Cristal beers. 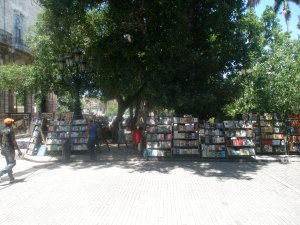 I love these small markets. I would be interested in working with those on the Great Northern Peninsula to establish a marketplace for small entrepreneurs, hobbyists and craft producers. There are higher volumes of traffic during the summer months, with Gros Morne National Park attracting 174,000 visitors and the St. Barbe Ferry traffic nearly 80,000 people from May-October. There is an abundance of things that could be sold, or maybe it would be product specific to gain the attention.