This is where the Norse lived more than 1,000 years ago. The remains of houses, workshops and outer buildings are present by the impressions still left in the ground. Imagine living in L’Anse aux Meadows and having to withstand the harsh winter climate. Today this is a Parks Canada and World UNESCO Heritage Site which in season has more than 30,000 visitors.

A look from the mounds one can see a re-constructed site, where one can get educated on a day in the life of a Viking. This was my first time visiting during the winter. It was bitterly cold, as the wind came from the water. If I was living as a Viking, I would stay near the fire or make sure I was wearing my sealskin boots (they probably used sheep skin). 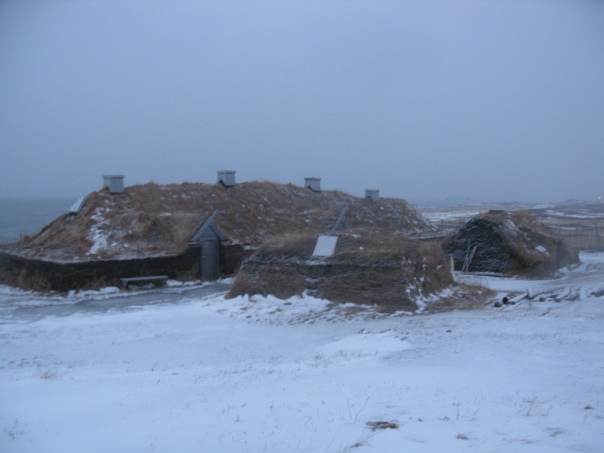 The Great Northern Peninsula is home to many firsts – including the Norse being the first to re-discover North America, as Native people were already inhabiting this island. We have a connection to many parts of Europe as a point of first contact with the Basque coming in the 1500’s, Captain James Cook, the French, English, and Irish settlers shortly thereafter. We have a long-standing history from the First Maritime Archaic Indians, Paleo-eskimo, Groswater-Eskimo and recent Indians to the point when Europeans came to North America. The proof is at L’Anse aux Meadows, NL on the Great Northern Peninsula – you may want to find yourself here too!

This site has been showcased in the Province’s Award-Winning Tourism Ads – you too may want to find yourself exploring the Viking Trail, Route 430 and experiencing what life was like living as a Viking more than 1,000 years ago.