Roddickton-Bide Arm is a region of the Great Northern Peninsula where hay is baled, and sheep would go to pasture. There is a tremendous opportunity to grow more agricultural products and ranch animals.

There are a number of individuals that are hobbyists farmers, planting root crops for subsistence, while others are growing on much larger scale. I enjoy purchasing fresh herbs, spices, teas and other organically grown items from Elsie and taking a walk on her trail of memories (See past article at: https://liveruralnl.com/2014/09/21/fresh-vegetables-herbs-teas-creams-and-a-blast-for-the-past/).

Recently, I dropped by the large greenhouse of Calvin’s on Route 433 outside the Town of Roddickton-Bide Arm. Last year they experimented with growing grapes. This year, many new items are growing including yellow summer squash, depicted below:

I was impressed by the range of product from cauliflower, zucchini, green onion, tomato, squash, greens, carrots, flowers and many more root crops and berries.

The friendly and knowledgeable staff are more than helpful, taking the care to find exactly what you are looking for to eat a little healthier. The cauliflower was so sweet,likely the best I’ve ever tasted.

Buying local creates jobs, builds a stronger economy. Sourcing your food locally helps with food security, reduces reliance on green house gases and gives you an understand of where your food came from, how it was grown and handled. Basically you can trace it from the source to your plate.

I encourage you to visit local farms, farmer’s markets, greenhouses, community gardens, grow your own and/or share with a friend or neighbour. We have incredible opportunity to grow good nutritious foods on the Great Northern Peninsula. We’ve been doing the basics for centuries.

Marjorie Dempster is the artist behind the Pebble Beach Studio at Plum Point, NL on Great Northern Peninsula. We are lucky to have such talent that is one of our own, that truly depicts rural living. She should inspire us all to follow our interests.

Majorie was one of many families in rural Newfoundland & Labrador to experience re-settlement. Her move was in 1972 when her family left the Fishot island, which is just a few kilometers from the scenic Town of Conche to settle in Port au Choix. Marjorie grew up around the fishery and outport Newfoundland. After raising her family, she opted to change her focus from painting walls to painting on canvas.

Who would have thought that an acrylic Christmas present from her husband, would create an opportunity to depict our culture on canvas?

I purchased one of her tree liver designs (depicted below) in Red Bay, Labrador during the summer of 2012 from the Women’s Institute Gift Shop. I loved the way the lighthouse was shaped on the craggy coastline from the natural product. This has value! In 2002, in starting Flower’s Island Museum, I felt a much closer connection to lighthouses and the important role they played for our fishers. Those who earned their living from the sea.

This past Monday, I again saw more of Marjorie’s brilliant work. This piece was donated in aid of Breast Cancer Research. The color and shape of the flowers in bloom, along with a unique sky background reminds me of impressionism.

Both pictures have seal products next to her art. This is also a very important part of our living culture on the Great Northern Peninsula.

I really enjoy  my new hobby, I  do hope to continue as long as…..God Guides My Hand. – Marjorie Dempster

I am impressed by Marjorie for finding her talent and pursuing it with entrepreneurial action. We all have talents to share. If you like her work, visit www.pebblebeachstudio.com.

Barry Penton, is a realist artist that grew up on Fogo Island in rural Newfoundland & Labrador. His artwork illustrates brilliant colors and impeccable attention to detail. His art certainly appeals to me as a lover of all things rural.

My first encounter with this artist was via Facebook. A friend had posted the image, “Fill Ya Boots” below as part of a contest. I decided to “like” and “share” this image with hope of winning the original artwork. It was shared nearly 2,000 times. To my surprise, I got a message from the artist, that I had indeed won the contest and could pick up the piece of original artwork in Mount Pearl. After the passage of time, the artist was so kind to mail me this piece which currently hangs in my bedroom near another Outport piece of punts from Fogo Island. I plan to later place this piece at my office.

The image reminds me of my own childhood, as we grew up wearing rubber boots. They were an essential item given the time we spent on the shoreline of Green Island Cove in search of sea life and adventure. Some days were filled with picking mussels, catching sea lice, searching for jellyfish, skipping rocks, building sand castles or hopping from exposed rock to rock. Sometimes however, we went over our boots and would have to do this traditional dumping of water. #greatmemories

The art brings a smile to my face. My upbringing is one that is very rural, despite spending a year of my university days in some of the largest cities in the world, travelling dozens of different countries and being immersed in many cultures, my heart is always in rural Newfoundland & Labrador. I am one of the lucky ones, able to continue to work and live rural.

“When you live in a place so long, you learn about the place, history and it’s people. Once you have been gone for long, you gain a new appreciation for home and how you love to remember it”. – Barry Penton

I want to thank Barry Penton for sharing your talents. I hope others will enjoy your art of rural Newfoundland & Labrador. If anyone is interested in learning more about the artist or purchase some of his artwork, you can visit: http://www.barrypentonart.bigcartel.com/.

Nearly forty mummers braved a -16 temperature with a wind chill that reached -31 to keep the tradition of mummering alive and well with the 4th Annual Mummer’s Walk at the Green Island Cove Lion’s Club.

Mummers came from near and far from communities of Anchor Point, Savage Cove, Flower’s Cove, Green Island Cove, Green Island Brook, St. Lunaire-Griquet and many citizens from surrounding communities visiting the Lion’s Club, such as Sandy Cove, Deadman’s Cove and even from mainland Canada to see what the Mummer’s Walk so all about and enjoy the fun! 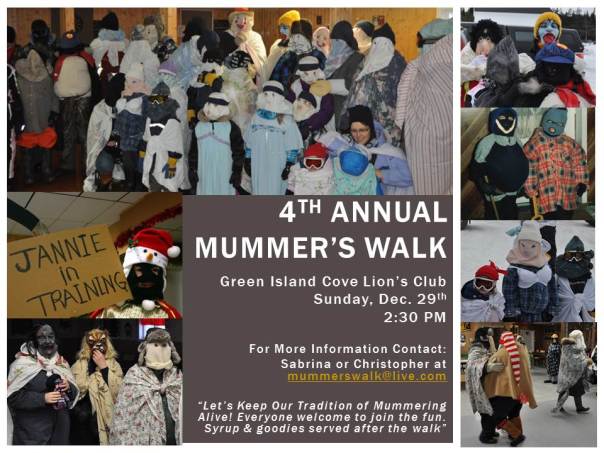 The rig-up started shortly after 2 PM and just after 2:30 PM, Sabrina and I started the event noting the original idea of hosting a community event that would bring people together and would encourage more active mummering in rural Newfoundland & Labrador, especially since we remembered large groups of mummers from our childhood.

The first was held in Flowers Cove, followed by Anchor Point and last years was in Savage Cove.

This years event all started with the talented Way Brothers performed a couple of traditional tunes on the guitar and accordion, including the famous Simini tune, “The Mummer’s Song“.

The group broke out into dance on the floor. It was great to see such a crowd turn-out and participate in the Mummer’s Walk and a number of youth watching the festivities. These are the future generations to learn the tradition and pass them on.

Due to high wind we opted to get rides to the head of the Cove and walk back to the Lion’s Club. Some Mummer’s jumped in the pans of trucks and we were off…

The residents, especially seniors were perched at their windows anxiously waiting for the long line of mummers to pass by their homes.

They were people waiting in vehicles, residents waving from windows or door steps, excited to see the large group of mummers. A group this large, likely not seen for decades in the community of Green Island Cove.

The walk was a lot of fun. We would all return to the Green Island Cove Lion’s Club and have hot chocolate, Purity Syrup and Chocolates for a treat. It was a great time to mingle and talk about going mummering tonight or another in Christmas. 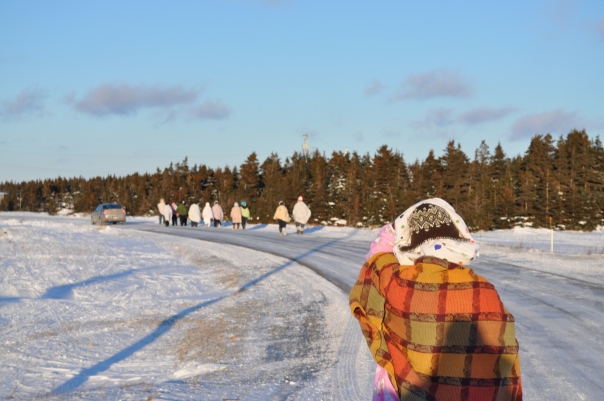 So if you hear knocks on your door, please let the friendly mummers into your home and enjoy the tradition that is forever in our hearts and souls, making rural Newfoundland and Labrador that perfect place to celebrate Christmas and the place we call home.

Below is a sampling of some other photos I managed at the event:

A big thank you to all who took the time to dress up and participate, the Green Island Cove Lion’s Club for providing the venue, all the visitors who came to the event and watch, Ryan and Monty for playing a couple of tunes, Loomis for coordinating music, logistics and bringing lots of spirit and to anyone else who helped in any way. I encourage you all to go Mummering this Christmas. I’ll be doing my part to continue to keep the tradition alive.

We’ll keep you all posted on the 5th Annual Mummer’s Walk in the New Year….

Santa’s Gingerbread House – A New Tradition at the Mitchelmore’s

Traditions become steeped in our culture and are passed on from generation to generation. Sometimes they are long standing, but sometimes they begin and will continue to be passed on to the next generation. Unlike some families that have built homemade gingerbread houses or homes from kits for years, my mom and I started building the basic gingerbread house just a couple of years ago. Here is our house from last year: 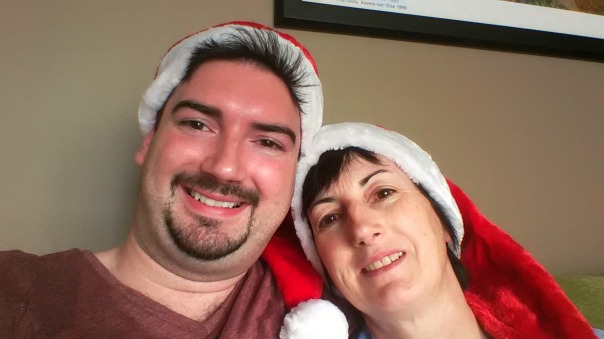 Although my schedule is extremely busy, one has to make time for family and continue with our traditions. We got up early and this was our first task after breakfast.

Tonight, after a day of activities we will watch my favourite Christmas movie, “It’s a Wonderful Life”.