Where have all the Vikings gone?

L’Anse Aux Meadows is home to a World UNESCO Heritage Site – as the Vikings came more than 1,000 years ago to a place they called “Vinland“. To celebrate the new millennium and 1,000 years of history a non-profit entity of Norstead was established. It is near the UNESCO site further on Route 436, a sign will guide you down a short gravel road to a Viking Village and Port of Trade. I travel there several times throughout the summer, it should also be on your list.

Norstead has a really cool landscape as it is nestled in its own little part of the cove. The ocean and  islands are forever in the backdrop, making for a photographer’s paradise.

My European friends are posing by a symbolic rock that has an image of the viking ship. The long sod covered building in the background is home to the Snorri. The boat house boasts a life-size replica and was actively sailed from Scandinavia, Greenland, Markland and finally Vinland. During the summer season you would be greeted by the colourful Lambi, all too willing to explain the ship and viking life.

The Viking church and forge are part of the Village. During summer one will find the Blacksmith hammer out some nails, a sword, helmet or other necessary item to survive in rural Newfoundland & Labrador in the year 1,000.

I would make a pretty serious blacksmith’s assistant. I am not sure I have the look of the Vikings though with all that British and Irish Ancestry.

The Vikings and the animals that spend late-Spring until early Fall have all gone. The site is quiet during the winter. I would imagine the Vikings 1,000 years ago found the weather on the Great Northern Peninsula extremely harsh. 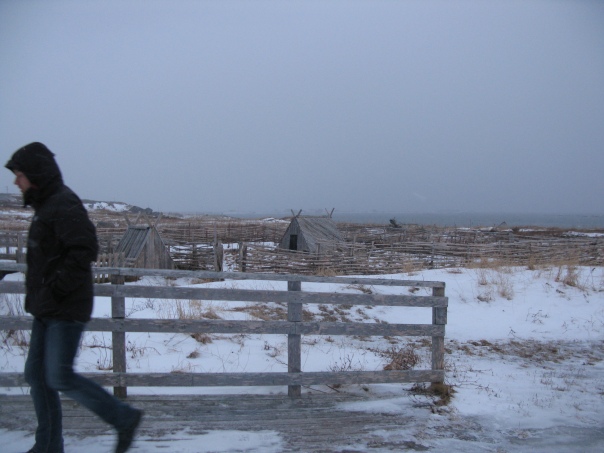 As we walk away, we know there is a valuable experience waiting for the everyday visitor. Be sure to visit Norstead on your next time on the Viking Trail Highway, Route 430.