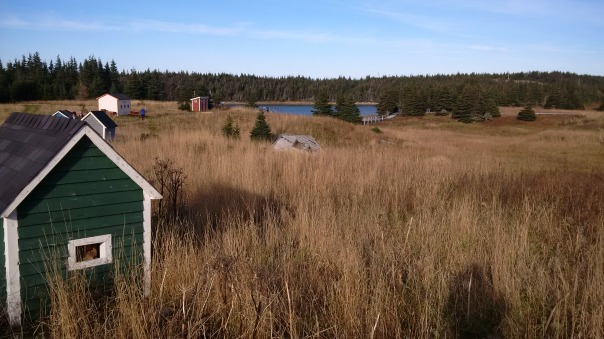 Deep Cove Winter Housing Site on the Great Northern Peninsula is a wonderful place to visit year-round. I had the opportunity to visit with a group of teachers as we toured several communities in the Straits. A 1.4 KM boardwalk loops around the site, with a new trail developed through funding assisting the Straits Development Association to expand a trail to the beach.

Anchor Point, NL has declared that it is the first English settlement on the Viking Trail (Route 430) on the Great Northern Peninsula. The Town was first settled circa 1740 by Robert Bartlett and his nephew Bob Genge from Somerset, England. The area was used for fishing, sealing and trapping which led to the establishment of merchant trading posts bolstering its local  economy.

During summer, the settlers of Anchor Point had taken up an abundance of activity that surrounded the sea, as the rich waters could be viewed from any resident window. However, during winter the families moved inland to smaller homes they built in Deep Cove just a few kilometers to the south. Some shared houses with other families. This enclosed site provided to be more efficient and protected the settlers from the elements and harsh conditions in rural Newfoundland during the 19th and into the 20th century. Settlers would move back to their permanent homes in Anchor Point after winter. Deep Cove is noted as the last inhabited winter housing site in Newfoundland.

A beautiful board walk and walking trail leads you to the site. As you walk where past residents before you walked there are interpretative panels noting the history of the community, how houses were built, what residents did for fun, the role of education/religion/man/woman and explanation of several structures and necessities. In 2012, funding aided with the development of adding miniature replica houses and structures along the board walk. Further funding to develop the trail network through job creation partnerships occurred in 2013-2014.

A piece of history awaits your eyes… make sure you take the time to reflect on our past. We have such a rich culture and history on the Great Northern Peninsula.