I visited Ireland in 2007. We celebrated St. Patrick’s Day in Dublin with local Irish men. This happened because the week before Jen and I were in Stockholm, Sweden and starting talking to them in the street. I am glad she did, because we had a truly authentic Irish Paddy’s Day experience with the kitchen party at an Irish residence, to whirly burgers and more. Thank you James, Elmo and others. Jen & I will never forget the times at McGowens.

We returned again in April, after missing our cheap flights with both of us over sleeping; as we all celebrated the end of the semester the night before. This resulted in us taking multiple trains, underground, bus, ferry, shuttle and tram. We travelled from England to Wales to Ireland to dock in Dublin, Ireland 12 hours later than expected, but we made it. My final visit to the island was in December 2007 when I flew to Edinburgh alone prior to Christmas. There I met the Dodgemeister and a Swedish Princess. After a couple of days I took the train to Glasgow and the ferry to Belfast, Northern Ireland. On the ferry, I watched Meet the Robinson’s, one of Pixar’s excellent movies. It is right up there with Despicable Me. After arriving in Belfast, I was able to experience the Christmas Markets around city hall and enjoy many hours of excellent shopping.

As you can see, my previous trips to Ireland and Northern Ireland resulted in multiple forms of transit. Never though, did I ever rent a car and attempt to drive on the left hand side of the road, until November 2010. 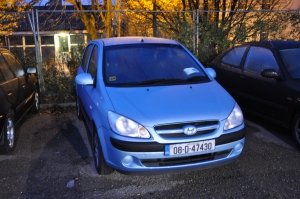 My mother must have been very trusting or scared for her life constantly. After we landed at the Cork airport, I picked up my rental car from the Budget Kiosk desk. After getting in and driving one car it had an incredible beeping noise that would not go away. I check all doors, windows, handbreak, but nothing seemed to stop it. So back to the Kiosk and they exchanged my Nissan for a little Hyundai Getz.

Side View of the Hyundai Getz Street In Ireland

Our flight was delayed from Paris, coupled with the delay with changing the rental car pitted me in the second largest city in Ireland during rush hour traffic with no experience driving on the left. I have to say it was quite the daunting driving experience, but after getting parked that night each successive day seemed like a breeze.

I love Ireland, it is like a second homecoming, as the beauty of the land reminds me of being in rural Newfoundland, only the grass in Ireland is Emerald Green, even in November. In 2007, I made multiple trips, but never really experienced Ireland, as I did not venture outside capital cities. Therefore, I decided it was important to see the countryside and the best way to achieve this was to rent a car, as it allowed me the freedom to explore the tiny villages and rural castles.

Prior to leaving I downloaded maps on my GPS (Gertrude Prudence Spencer, I mean Global Positioning System) as I felt that getting use to the narrow roads, new landscape and driving on the left would be enough for me to manage without having to find my destination. It would have been almost impossible to manage without the GPS, driving as much time would have been lost trying to find locations.

I enjoyed taking “roundabouts” (traffic circles), claiming to be “roundabout king”. I am sure though maybe I received a horn once or twice.

The rural regions of Ireland are beautiful and the landscapes breathtaking. One does not have to look far to find why one would want to come to Ireland. For many of the same reasons, people flock to rural Newfoundland & Labrador.
Live Rural NL 0
Christopher Mitchelmore