Caribou and the Great Northern Peninsula

Sir Dr. Wilfred Grenfell, who founded the Grenfell Mission more than 100 years ago, was the first to introduce reindeer to the Great Northern Peninsula. After reading Rompkey’s “Grenfell of Labrador” it is clear Grenfell purchased some 300 reindeer from Scandinavian countries to help provide a food supply to locals of the North.

In North America, reindeer are commonly referred to as the caribou. On the Great Northern Peninsula we are seeing the caribou coming back in larger numbers.

The Great Northern Peninsula has a unique offering including the presence of abundant nature and wildlife. This past winter when I drove from St. Anthony to Green Island Cove I was greeted by a small heard of caribou in Eddies Cove East (Route 430 – Viking Trail) and pulled over to wait for them to cross the road. After driving through this tiny community in “The Straits” to the south I saw a total of nine caribou. It was unusual for them to be grazing for food on the opposite side of the road adjacent to the frozen Strait of Belle Isle with Labrador dominating in the background. It was one of those moments when you just stare in amazement.

In late May, when attending the graduation of students at James Cook Memorial, Cook’s Harbour I also saw a bunch of caribou off Route 435.

Enroute to Croque and St. Julien’s, I met these caribou trotting along Route 432 (Grenfell Drive) near the Town of Main Brook.

The Great Northern Peninsula is a place to visit at any time of year, especially if you want to view the majestic caribou (reindeer).  The Christmas season is quickly approaching, reminding us that Santa and his reindeer will be on his way in just a month from today.

The Great Northern Peninsula has one of the longest winter seasons on the Island portion of the province of Newfoundland & Labrador. We are the ideal location for an array of winter activities and enjoy the scenery as you experience the countryside, view the frozen Strait of Belle Isle with Labrador as the backdrop or snowmobile on our most Northerly section of the remaining Appalachian mountains.

There is a number of trail networks for cross-country ski-ing or snow-shoeing, as well as the opportunity for the adventurous type to visit alternative locations.

You can enjoy ice-fishing activities, pond skating or a good ol’ hockey game that really immerse you in all the fun and enjoyment winter brings to the people of the North. We embrace winter activities and have a love for spending time in the great outdoors, whether it be at the cabin with a crackling fire, game of cards and a cup of tea or at home with the family building a snowman and making those snow angels we all did when we were kids.

It certainly is never too early to begin your plan to enjoy all the Great Northern Peninsula has to offer.

Icebergs are your doorstep

In June the icebergs scatter the coves, bays and shores along the Strait of Belle Isle and surround the entire Great Northern Peninsula.

These icebergs were taken from the doorstep in L’Anse au Clair, Labrador this past summer:

The Peterman Ice Island left these icebergs in Goose Cove, Newfoundland on the tip of the Great Northern Peninsula in July 2011.

The Great Northern Peninsula hosts an annual iceberg festival, which is scheduled to run from June 6th to June 15th, 2014. Check for updates at www.theicebergfestival.ca. 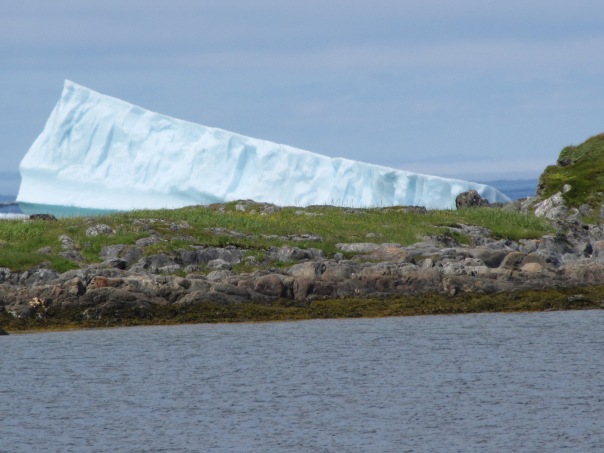 Icebergs are at your doorstep on the Great Northern Peninsula. You can see them on boat tours, at Festivals, with binoculars, on walking trails, up close or on the distance.

Seals on the Ice

Last Sunday, I had left my home to drive to grandmother’s house in Nameless Cove for a big turkey dinner on Easter Sunday. Driving through the community, I saw a black spot on the ice. 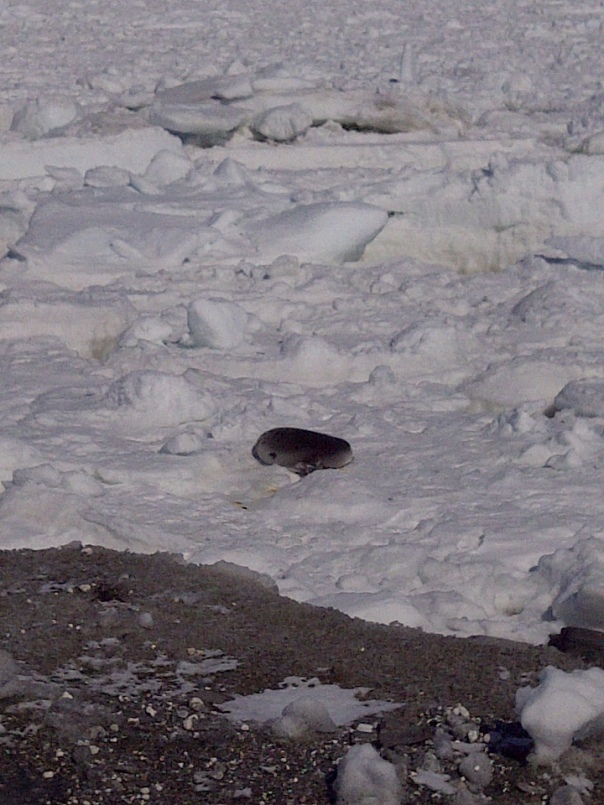 The seal is at the edge of the beach. 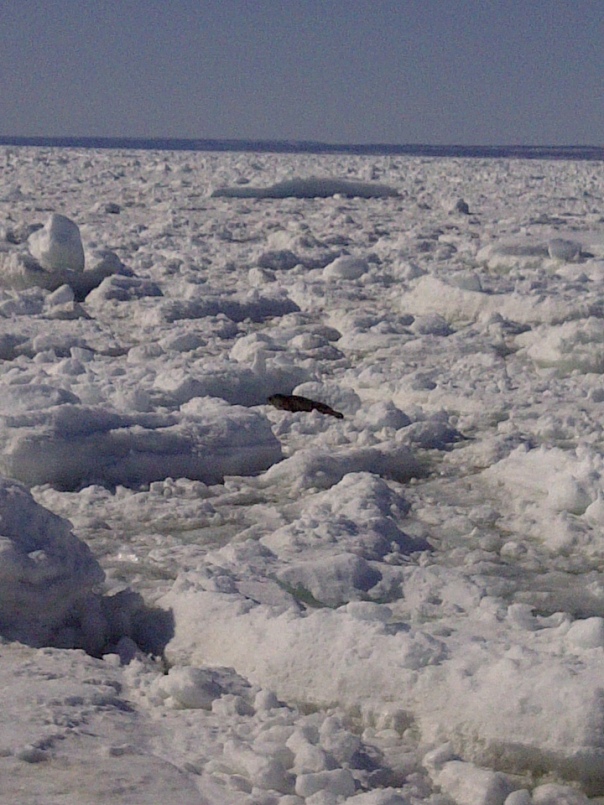 Another seal is close to shore, as pack ice had blocked the Strait of Belle Isle. The land in the background, well that’s “The Big Land” – Labrador. I’m not sure people believe me when I saw, “I can see Labrador from my window,” but it is true.  Just a short 15 kilometres between us and still no plan to connect us by a fixed-link. Advancing transportation and telecommunication networks will be key to Southern Labrador and the Great Northern Peninsula‘s future long-term sustainability. Quebec is completing Route 138 (Lower North Shore Highway), this means Montreal will be just 13 hours drive from this province. It will transform the shipping of goods and services. The current administration promised a feasibility study – a link has not yet materialized. Instead it has opted to build a multi-billion dollar energy project, laying cables on the ocean floor that will interfere with our way of life, the fishery – our mainstay, versus going underground with a tunnel. It was noted in a pre-feasibility study that if both projects were paired, savings of nearly $400 million would be realized. More work is needed exploring a fixed-link, but advancing transportation networks is imminent, we can not continue to be plagued with annual increased rates at Marine Atlantic and an unreliable schedule for shipment of goods and services. These costs are ultimately passed on to the consumer.  We need to be more strategic and consider where we need to go over the long-term, but not forget our roots – our beginnings.

Seals played a critical role in the development of our as a permanent settlement. In the early 1800’s they were a major food source, as the island had only 9 types of mammalia. Additionally, as a British Colony, we shipped both whale and seal oil to the homeland. This oil was used in lamps and correlated with the Industrial Revolution. Today, this product is banned in the United Kingdom.

It will be another couple of days before the sealers take to the ice. I wish much success in this years hunt, as the seal provides valuable meat, oils and pelts that are harvested in a humane and sustainable way. Sealing is part of our tradition, and will continue to remain that way well into the future.

What a view today on the Great Northern Peninsula…

The Great Northern Peninsula has a unique offering including the presence of abundant nature and wildlife. Today as I drove from St. Anthony to Green Island Cove I was greeted by a small heard of caribou in Eddies Cove East and pulled over to wait for them to cross the road. After driving through this tiny community in “The Straits” to the south I saw a total of nine caribou. It was unusual for them to be grazing for food on the opposite side of the road adjacent to the frozen Strait of Belle Isle with Labrador dominating in the background. It was one of those moments when you stared in amazement. I was fortunate to have a camera and able to pull over and take a few photos. See the gallery below:

A visit to the Straits region of the Great Northern Peninsula may be the perfect opportunity for you to get your glimpse of these beautiful animals.

Sometimes, the best surprises don’t cost you a thing.