← Why Are We Lagging Behind the Technological Times? – 111 Years Ago the First Transatlantic Wireless Signal sent from Signal Hill, NL
Find Yourself on Bell Island, Newfoundland & Labrador → 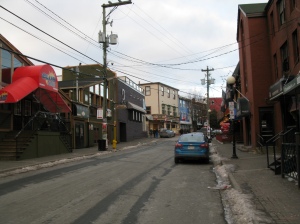 Iconic George Street has the most bars and pubs per square feet than any street in North America. It is something I well-promoted as a University student studying in Prague. I even remember at our Newfoundland & Labrador party hosting a drinking game with two competitors taking a tour of George Street. The person would begin at Lottie’s – Home of the White Russian and no cover charge, which was common place to start any night on the street. They would work through the many bars and pubs, ending at Club One/Sundance which is near the end of the street.

My European friends and I took a daytime tour of the street on New Year’s Eve. It is certainly a different landscape during the daytime. We ended up visiting the Yellowbelly Brewery to enjoy some locally produced micro-brews. 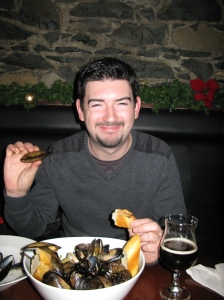 One of my friend’s tried the sampler, and well the other and I had the Seasonal Mummer’s Brew. It just seemed like the right ale to try and we were not disappointed.

I enjoy the atmosphere at the Yellowbelly. It reminds of other micro-breweries I have visited throughout parts of Canada, cave-like bars in the Czech Republic and a slant on a pub in Ireland.

This building is iconic as it is one of only to survive the second fire that devastated the city of St. Johns, circa 1892? I may be wrong and my “Townie” friends may have to correct me. Our education system did not seem to include a history course and very little studies on Newfoundland & Labrador at least at my high school in the late 90’s/early 2000’s. It is quite a disappointment as I reflect on aspects of our history and culture through various texts and past studies at Memorial University from my personal interest in the matter versus discussing and debating elements in the classroom. 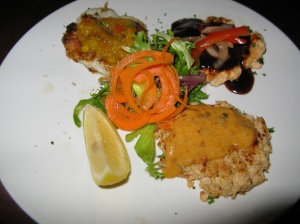 Besides the atmosphere, I enjoy the food. I was served up a heaping plate of mussels. Certainly too large of a portion size for one. It is a good thing my friends helped me out a little. We also had a helping of the fish cakes.

I have never been disappointed with a visit to the Yellowbelly, unless they are unable to seat me at the Public House. I have never visited their restaurant at the upper-level, they also rent space for special events.

If you want a nice place to enjoy some good grub and locally produced beers when away from Rural NL and visiting the Capital this may be the place for you.

Posted on January 15, 2012, in Vacations. Bookmark the permalink. Leave a comment.

← Why Are We Lagging Behind the Technological Times? – 111 Years Ago the First Transatlantic Wireless Signal sent from Signal Hill, NL
Find Yourself on Bell Island, Newfoundland & Labrador →